An Open Letter to President Trump, Commander in Chief

I’ve known Doug Ross for years and he is an excellent journalist, strong conservative and all around wonderful guy.  When I saw this letter to the President, I knew it must be shared far and wide.  After reading a portion on the air – the email response was overwhelming, people want to read it for themselves. So here it is with a link back to Doug’s site.  Sharing is caring!!!

AN OPEN LETTER TO THE PRESIDENT: How You Can Take the Fight to the Deep State

As is well known, the tangled web of the federal bureaucracy and national media have produced an embedded administrative state that some term the “Deep State”.Through administrations of both parties, in good times and bad, the size and scale of the federal leviathan has grown completely unchecked.

And like a living organism, it has, over time, developed its own survival instinct.

Among its defensive tactics are the collective set of crimes known as “Spygate”, which represents the weaponization of Obama intelligence and law enforcement agencies against you. Starting in 2015, deep state actors embedded in CIA, DOJ, DNI and FBI leadership positions launched simultaneous campaigns more suitable for a South American dictatorship than the United States.

The first such campaign was an effort to exonerate Hillary Clinton for her egregious and clearly criminal mishandling of huge troves of classified information. The second, of course, was the attempt to first prevent you from winning the presidency and then, immediately upon your victory, to have you impeached or removed from office. The latter scheme includes the Mueller special counsel itself, which is simply a second phase of the scheme to entrap Trump administration officials in various “collusion” scandals.

Many pro-administration pundits believe that all you can do is wait for the outcome of the deeply conflicted Mueller probe, which has suffered forced attrition due to a variety of untoward bias and prejudice. Once the special counsel report has been delivered, you could choose to declassify key assets that document the criminality of those behind Spygate.

But there is another way.

Use the Clintons to take the Deep State to the Woodshed

Hillary Clinton, like Barack Obama, is a radical leftist who despises the Constitution and the free market. Her troubling history is well-documented, as even The Washington Post observed in 2008 when the editors of that dying journal were trying to get then-Senator Obama nominated.

Hillary Clinton and her husband have some secrets you can help expose, in spite of what the Mueller probe chooses to investigate, which, thus far, appears to be only persons affiliated with one particular political party.

The Cox Report was issued in 1999, a time when some House Democrats still put country before party, after an investigation of some shocking transfers of military technology to the Communist Chinese military.

This special committee, created by a 409-10 vote of the U.S. House of Representatives on June 18, 1998, was tasked with the responsibility of investigating whether technology or information was transferred to the People’s Republic of China that may have contributed to the enhancement of the nuclear-armed intercontinental ballistic missiles or to the manufacture of weapons of mass destruction… …The committee’s final report was approved unanimously by all 9 [bipartisan] members. The redacted version of the report was released to the public May 25, 1999.The full report has never been released.

Because, in an ominous foreshadowing of the Uranium One scandal, the Clintons appear to have traded critical U.S. military secrets to the Red Chinese in exchange for millions in campaign contributions.

For instance, on 9/13/1995, President Clinton met with John Huang and James Riady (pictured below). During the meeting, Huang expressed an interest in becoming a fund-raiser for the Democratic National Committee. 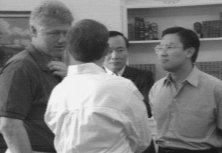 In this position at the DNC, Huang raised $3.4 million. The DNC was later forced to return nearly $2 million when a Congressional investigation revealed “problems” with the source of the funds. Huang was later convicted of crimes related to illegally reimbursing campaign contributions with Asian funds. Riady was also convicted of related campaign finance crimes. A U.S. Senate campaign finance report stated that Riady had a, “long-term relationship with… Chinese intelligence.”In effect, the Clinton colluded with the Chinese to sell American military secrets.

Warning not Acknowledged: Six-Year-Old Shooting Teacher Could Have Been Prevented

Late Comedian and Actor Robin Williams Warned Us About Biden

There is Some “There” There With the Vaccines…