Guns and the media

This is the column that prompted the St. Louis Post Dispatch to suspend me on April 28, 2017 for supposed paid advocacy work on behalf of the National Rifle Association.  After terminating the contract that evening, a media firestorm erupted over the suppression of conservative speech in a major newspaper.  After Fox News, Drudge, Newsbusters, Twitchy, the New York Post, the Washington Times and other outlets covered the story, the Post Dispatch saw fit to put the column behind a paywall to stop people from seeing what I wrote.  Here it is for posterity’s sake.

Only 7 percent of journalists identified as Republican when polled on their political affiliations in 2013 in a study done by Indiana University professors. That poll result, which also noted that more than half of participating journalists stated no party affiliation, came to mind when I read an April 14 St. Louis American item entitled: “If we loved our children as much as our guns.”

Admittedly it was a guest column and not a product of the news-reporting staff, but opposing views weren’t taken into account. Gun ownership in America is a right that is enshrined in the Constitution, and owning a gun has no bearing on whether people love their children.

In fact, the author never addressed single-parent homes or personal responsibility, perhaps because those subjects require an honest look at community and culture. A look at those things would present a searing indictment of the author’s political biases and, perhaps, of the paper giving prominence to her views.

One of the primary reasons St. Louis has the highest per capita murder rate in the country is because of drug trafficking hot spots where turf wars take lives. This is widely reported, yet the writer didn’t mention that detail either. Would discussing the drug wars in the city of St. Louis naturally lead to a discussion of our open southern border? That would be a bit inconvenient to the main task of painting law abiding gun owners as fiends.

Perhaps the homogeneity of America’s newsrooms begins in journalism school. Missouri School of Journalism professor emeritus George Kennedy offered his opinion of gun-owning National Rifle Association members in a Columbia Missourian commentary: “The NRA is the acronym for the National Rifle Association, founded in 1871, headquartered in Fairfax, Virginia, and feared by politicians across America.” Really. Tons of politicians cowering in fear of the NRA eh?

Kennedy then describes the barbaric nature of the Islamic State and goes on to say of law abiding, gun-owning Americans: “What makes the NRA so feared is its willingness to spend heavily and campaign aggressively in pursuit of its goal of removing all restrictions on the possession and use of firearms just about anywhere by just about anyone.”

Amusing. NRA members committed none of the gun crimes that he mentioned in his article. When inner city residents complain of crime in their neighborhoods or decry the lack of adequate policing, the NRA or its membership are never mentioned. The NRA does not advocate for felons to own guns, nor is it NRA policy to seek to lower the legal age to own a firearm. To describe their activities in this manner is to slander the organization. Would the Missourian open its op-ed section for an NRA response?

To further illustrate the ridiculous nature of Kennedy’s comparison, when has a member of the NRA ever decapitated, set on fire, tossed from a rooftop or otherwise terrorized another American? The association is not only rife with improper context; it is false on its face. Yet the Missourian saw fit to publish it without question, I believe, because it suits the ideological bent of the opinion editor.
This failure to represent the opposing, especially conservative, view is an increasingly apparent deficit in the news reporting apparatus in our country. Republicans seek other news outlets that don’t demonize them or compare them to terrorists, simply because they own a gun or support an organization founded to give blacks the right to own guns and use them to defend themselves. The NRA stood in opposition to the Ku Klux Klan. This clarifying historical detail on the founding of the NRA rarely makes it into news media characterizations of the organization.

It’s understandable that we seek out opinions and news that support our viewpoint. Confirmation bias is a very real part of how people consume news and media. However, we should be appalled to see neighbors with whom we work, attend church, people that have children defending this country through military service — in other words, good decent people — portrayed in the same light as demonic murderers for the simple act of owning a firearm.

As newspapers across the nation come to grips with dwindling subscriber numbers, an introspective look is sorely needed into what is driving Americans away from legacy print media. 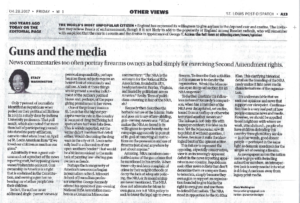