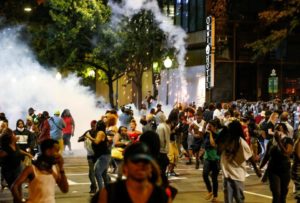 The act of protesting is  a right here in this country, rioting is not protesting it is an illegal activity that destroys private property and damages confidence in the rule of law.  Rioters are not protesting they are breaking the law.  To say that black protesters “need space to destroy” is an insult to us.  We are not emotionally stunted children who must be indulged in illegal acts.  This is insulting and racist (lower expectations for blacks because that is all we can handle.)

Keep in mind that these protests aren’t even organic in nature as 70% of the rioters arrested in Charlotte have out of state ID’s.  They’re paid anarchists.

Blacks who are rioting after each officer involved shooting are damaging the reputation of the black community and it has to stop.  If we truly want change, which I believe so many Americans do, we have to work within the channels available to us.  We have a responsibility to recognize the difficulty posed in focusing solely on Officer involved shootings instead of addressing the far greater number of black deaths due to crime in our inner cities.  So few of the officer involved shootings are actually cases that are legally suspect, many involve men who are carrying weapons or refusing to obey police directives.

In those cases such as Mr. Crawford; where he was shot holding a toy weapon in a Walmart after being swatted by a white bystander, protests are warranted and those responsible for a lack of prosecution should be drummed out of office.  In the case of a known criminal being shot while attacking a police officer there is no reason to protest.

As Americans we have the unique privilege of our rights being guaranteed by the Constitution.  To act as if this isn’t the case is to disdain the work of blacks that went before us, securing freedoms under arrest, being hit by the fire hose and other indignities.