After listening to Attorney General Loretta Lynch compare a mental illness (being transgendered) to being black and suffering under Jim Crow discrimination in the south, one has to question her fitness for office.  Protect your children, it’s your responsibility not Loretta’s.  She’s out to complete an agenda, your goal should center on the protection of your children.

People are refusing to address what happens when men are allowed into women’s restrooms.  Lets go to the evidence shall we?

Police have arrested a man accused of exposing himself to a 9-year-old boy in the bathroom of a Target store in Cedar Park in February.

Roel Anthony Vasquez, 27, was charged March 24 with indecency with a child by exposure. No one at the store could identify who he was when the incident occurred, so police asked for help from the public by releasing pictures of the suspect from store surveillance video in March.

SOUTH BEND — South Bend police are looking for a man who performed a sexual act Monday afternoon at a Target department store at 1400 E. Ireland Road, according to our news partner ABC57.

A 16-year-old girl was shopping at the department store when a man approached her from behind and performed a sexual act on himself at about 2 p.m., police said. The man got away, and police are still looking for him.

He’s a heavy-set white man in his 20s, police said.

San Diego police are searching for a man accused of sexually assaulting a woman in the aisle of a Target store in San Diego, pestering her for a date before reaching under her clothing to grope her.

The San Diego Police Department (SDPD) says the incident – being investigated as a case of sexual battery – happened around 9 p.m. on Halloween at a Target located at 5680 Balboa Ave.

Behold the typical response to any truth teller: lefties always bring out the Bigot Card. 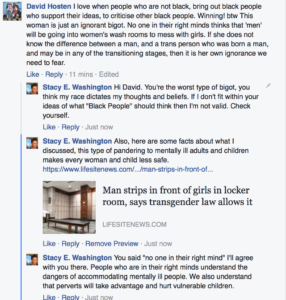