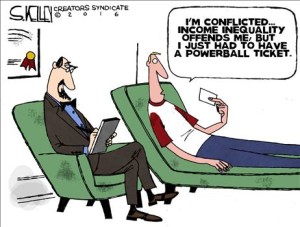 Well, President Obama promised a shorter State of the Union speech. Unfortunately time still got away from him: pandering to special interests on the left takes time! The lies flowed like cheap wine. The American people may have longed for a tawny port, or a heady bottle of Sauternes, but it was box wine all the way through tonight.

Let me be clear – although I didn’t support President Obamas candidacy either time that he ran, I did think back then that he would be good for race relations in this country. Instead of uniting Americans under the mantle of Martin Luther King, the president has engaged in a sustained attack on the foundational values that once bound Americans together; family, faith and work.

From historic increases in the number of unemployed Americans no longer looking for work (98 million), to increasing the number of Americans receiving food stamps to a record 46 million (the population of Spain), to the widespread division and racial animus that is evident in every corner of the country, the president has done a poor job of carrying the torch of unity and civil rights forward. Country to his statements tonight, our economy is not roaring back with a lackluster GDP growth and our allies quietly looking for another reserve currency.

Tonight the president continued to ignore the persecution of Christians in the Arab world while relentlessly castigating us all for perceived injustices to Muslims. Perceived slights can never rise to the level of carnage Christians in Iraq, Afghanistan and Egypt are suffering; entire tribes are being decimated. Little girls are being sold into sexual slavery by the Islamic State and the Muslim world still holds over 28 million blacks in slavery. Tonight was a perfect time for the leader of the free world to address these ills with strength of purpose. Obama refused to rise to the challenge.

President Obama further demonized millions of Americans that don’t believe in man made anthropological climate change, by lying about the scientific community’s level of “support”. The president failed to mention that satellite data has been fudged in an effort to silence dissent and create a basis for Americans to believe in his pet cause. When questioned about this, global cooling, climate change-ice age, global-warming punks can never answer questions with data. Just ask the president of the Sierra Club, Ted Cruz did and watching it never gets old.

Not desiring to leave anyone out, Obama pandered to a tiny slice of the Democrat party promising more free programs on the backs of taxpayers. The idea that the first two years of community college should be free is patently laughable. Public K-12 education isn’t free, and community college for all won’t be either. It’s just another injection of government failure into a system that should be left in the private sector.

Hardly a SOTU speech to be proud of. Yet proud was exactly what President Obama appeared. Meanwhile news breaking today that Iran, our newest ally is holding 10 American sailors for trespassing into Iranian waters while experiencing operational trouble with their vessels. Yet another inconvenient news item unmentioned tonight.

We can only hope that the next twelve months will be less eventful, less taxing and have fewer transformations. The slogan was Hope and Change. We’ve been changed, for the worse. We can only hope for the remaining term to pass by quickly.