Governor Scott Walker (R) Wisconsin is in Missouri today for a fundraiser.  Arriving early this morning he first attended church with friends and supporters and spent time listening to the concerns of Missourians.  Later in the day, Gov. Walker stopped by Sweet Sugar Fire Smokehouse in Olivette to pick up a bite to eat.  He did not give a formal stump speech, choosing instead to greet the public individually.  The crowd was a good size considering it wasn’t a formal campaign stop, and wasn’t widely advertised to the public.  I was able to ask two questions for Missouri voters this afternoon.

“I will not pick and choose which parts of the Constitution I will uphold.  I will be elected to uphold the whole Constitution.” ~ Governor Scott Walker 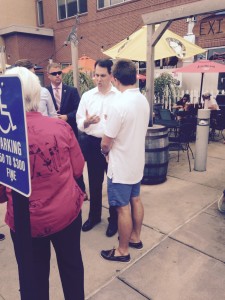 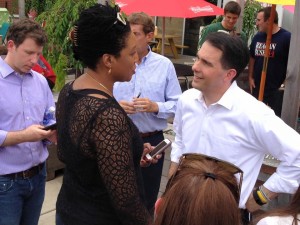 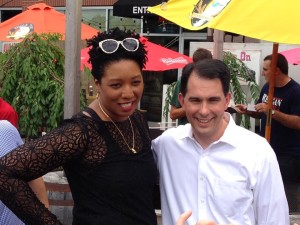 Later in the day, I was able to attend the private fundraiser where he gave a full length talk about his plans for governing the country.   Gov. Walker spoke of the need to have an experienced leader with a track record of winning against the left; clearly articulating how his wins in a solidly blue state were good for the people of Wisconsin.  He spent time with each person in the room and seemed extraordinarily at ease with everyone. He’s not a flamboyant character, I found him to have a strong presence and a clear concise manner of speaking.  I look forward to hearing and seeing more of him on the trail as the field narrows.