“Real” Jobless Rate Still Above 10% In Most States

This headline could also be “US Suffers Through Worst Economy in 83 Years…”  This news isn’t shocking, or it wouldn’t be if the MSM was reporting on it accurately.  But they aren’t.  Because of this the President isn’t being held to the will of the people on major issues such as domestic oil production and major project approval like the Keystone Pipeline.

Additionally, Americans are experiencing the lowest home ownership rates in recent memory, which is in keeping with the economic trends.  If you can’t find a job, you certainly can’t qualify for a home loan.

Two months from now, revised government estimates are likely to show that the economy is even bigger than the currently stated $15 trillion.

And while the numbers may make some blink or gasp, the mere size of gross domestic product won’t hide the reality that in terms of actual growth, this is also the worst economy in 83 years.

GDP growth is in the midst of its longest sub-3 percent annual growth rate since 1929, the beginning of the Great Depression, according to Bespoke Investment Group. The economy hasn’t topped 3 percent since 2005—before Federal Reserve Chairman Ben Bernanke took over—and is unlikely to do so this year.

So even if projections are correct that the economy is about 3 percent bigger than thought—say, another half-trillion dollars—the U.S. is still stuck in the slow-growth morass it has endured since the beginning of the Great Recession.

Nowhere is that more apparent than in employment.

Though employment has risen by 1.3 million over the past year, unemployment that counts the discouraged and underemployed, as well as the jobless (often called the “real” unemployment rate) has remained stubbornly high, at 13.8 percent of the workforce, according to the most recent count.

In fact, a state-by-state look at the numbers, released a few days ago and current through the first quarter, shows that just six states have real rates below 10 percent.

The best of the lot is North Dakota, at 6.2 percent, while the worst is in beaten-up Nevada, with a real rate of 19.6 percent.

Over the past year, the rate actually rose in six states (Alaska, Delaware, New Hampshire, New Jersey, New York and Pennsylvania) and was unchanged in three (Connecticut, Mississippi and Oregon). 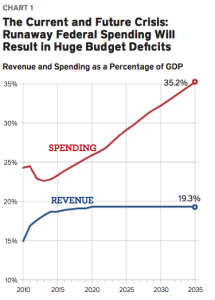 Read more about the plan from the Heritage Foundation here:  Saving the Dream

Stacy On The Right