Teresa Ferrin is a volunteer at a thrift shop in Phoenix, Arizona, and often comes across unique and interesting finds in the donations people bring in.  One of her fellow workers recently came to her  with several military awards pinned to a piece of cardboard, including a Purple Heart given during the Korean War in the 1950’s. The Purple Heart is an award given to a military service member who was wounded or killed during service. 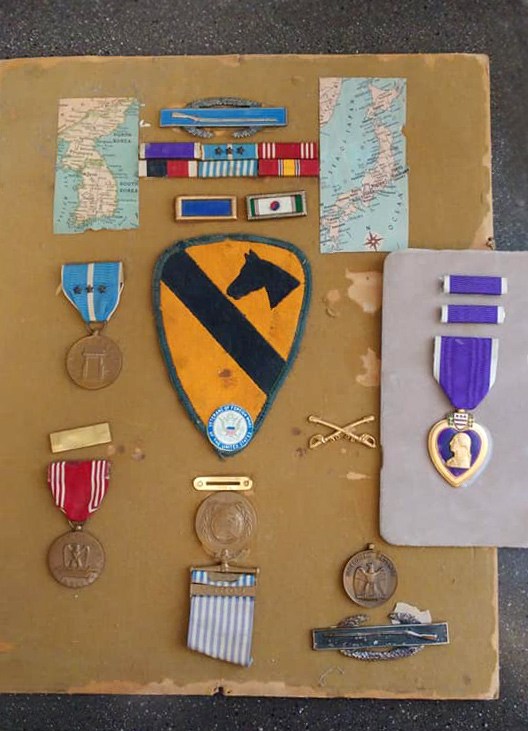 The recipient’s name, Erik Karl Blauberg, was inscribed on the back of the Purple Heart, and Teresa made it her mission to reunite the awards with either Blauberg or his family. In a Facebook post, Ferrin wrote:

“After much research, I was able to contact the surviving family (via Facebook) and let them know that we found these military decorations.”

Ferrin connected with a woman in Florida named Lisa Walker who was the daughter of Erik Blauberg. Lisa is one of eight children born to her mother and military father. For reasons unspecified, Walker states that she and her seven siblings were almost entirely raised by her mother, and that she barely knew her father who wasn’t present for most of her life. She certainly had no clue he had been awarded something such as the Purple Heart.

“I didn’t even know he had a Purple Heart. It would be the only thing we ever had of my father’s,” Walker told KTVK. “I do think it’s a sign from my father, but I don’t know. It’s just hard. It’s bittersweet.”

Ferrin told the news outlet that after connecting with Walker, she made arrangements to have the precious discovery mailed to Florida. The whole story is a bit surreal for Ferrin who has never successfully reunited any of her thrift store finds with their original owners until now.

As she was tracking down Erik Blauberg, Teresa Ferrin discovered that he passed away thirty years ago in the 1980’s while living in Apache Junction, Arizona. As a military child herself and having a father who also served in the Korean War, the reunion of the medals with Blauberg’s family was especially meaningful:

“My father was in Korea and I just felt like I would want that if somebody found it,” Ferrin said.

This piece originally appeared in UpliftingToday.com and is used by permission.

The opinions expressed by contributors and/or content partners are their own and do not necessarily reflect the views of Stacy Washington.

Train Crisis: US Trains Could Stop Running in One Week