Chuck Todd mocks Christians in an effort to damage Trump

Because being a Godless member of the media is something to aspire to.

Under the guise of sharing a Letter to the Editor, Chuck Todd attempts to influence Christian voters via his bully pulpit on Meet The Press.  This is typical behavior for those on the political left. Instead of assailing President Trump on his record on the economy or foreign policy, they use personal attacks against his largest voter block, Christians. 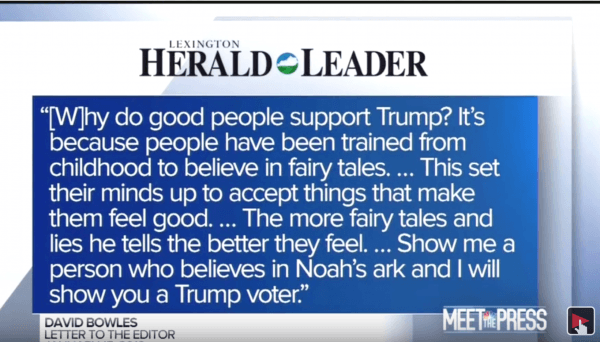 According to Todd, Noah’s Ark is a fairy tale. The letter he read on air was published in the Lexington Herald Leader and was obviously penned by a leftist. Todd used the letter in an attempt to delegitimize support for President Trump.

“This Sunday, alternative facts. The assault on truth (…) This morning, Meet the Press takes an in-depth look at our post-truth society and how a changing media landscape has created chaos out of order,” ~ Chuck Todd

Good journalistic practice would have dictated that Todd read a letter supporting the president or even better to leave it out of his broadcast.  Todd would never have published a similar letter that attacked Islam.

Obviously Todd isn’t a Christian and has no compunction about mocking people of faith; but what about his viewers? How many Democrats claim Christianity? Quite a few, but not many Democrats have a Biblical Worldview. According to Barna Group Research from 10 years ago there are “varying numbers of Americans who embrace the different aspects of biblical worldview thinking.” The survey found that:

It is true that the number of non-religious people in America is on the rise.  But over 70 percent of Americans consider themselves Christians.  Perhaps it’s time to inform Chuck Todd.

This comes on the heels of Christianity Today publishing an op-ed calling for the president’s removal from office for the sin of beating Hillary Clinton in 2016. Make no mistake about it, this is a concerted effort to tarnish President Trump’s image with Christians. It’s the carrot and stick approach, mostly the stick.

No unbeliever is going to bully me into voting for pro-abortion Democrats running for president.