#WV Senate Candidate Tennant is running from her support of Obama..

Natalie Tennant, West Virginia’s Secretary of State, is making the rounds touting her opposition to the Obama administrations EPA and their war on coal.  As well she should be, running in a state, that is reeling from the job losses they’ve suffered because of Obama’s EPA.  Her opponent Republican Shelley Moore Capito, has circulated a lovely photo of Natalie, muzzle loader raised high, at a Obama rally, insinuating that she’s just another shill for the administration.  Since her days of supporting the president in 2008 and 2012, Tennant has taken to running slick ads touting her new-found opposition to him, by “shutting the lights” out on his War on Coal.  Slick advertising doesn’t erase her past poor judgement, which is a clear indicator of how she will govern if elected to the Senate. 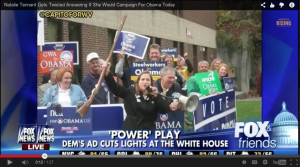 If you take a peek at her record, you will see a definite pattern of supporting President Obama over the needs of her constituents in West Virginia.  Let’s not forget that she served as a delegate at the 2012 Democratic National Convention. Should WV citizens trust her words on how she “doesn’t answer to President Obama”?  I’m not sure I would.

The Greenwire reported in September of 2012 that Tennant supported Obama’s War on Coal saying:

“Although many of the state’s top officials stayed away from this week’s convention, West Virginia delegates in attendance proclaimed themselves proud Democrats and defended President Obama’s stand on coal issues. … But Natalie Tennant, the West Virginia secretary of state, attended as a delegate and said the number of coal jobs has increased under Obama.” (Noelle Straub, “W.Va. Delegates Don’t Shy Away From Obama On Energy Policies,” Greenwire, 9/7/12)

Even more egregious than her ineptitude on Coal, in 2009, Tennant also pushed for the passage of Obamacare.  From the Charleston Daily Mail:

“Nine months into Obama’s presidency, the United Mine Workers of America staged its 71st annual Labor Day rally at Racine in Boone County. … More than 2,000 people attended this year, dozens of whom rode buses down from the state’s northern coalfields, according to one account. Judging from news accounts, speakers ranging from UMW President Cecil Roberts to Secretary of State Natalie Tennant stressed the importance of passing Obama’s health care reform legislation.” (Editorial, “A Big Difference In Public Messages,” Charleston Daily Mail, 9/9/09)

Hmmm.  She’s definitely changed her tune has she not? Watch the video from Fox and Friends this morning, is Natalie on the run?

Like it or not, Tennant is inextricably linked to the debacle that is President Obama, his administration, his EPA and now his abysmal approval ratings.  Anyone with good sense would run from that.  Her having the sense to run doesn’t mean she should be elected to represent West Virginians in the Senate.