Today Ed Martin and Ann Wagner debated at the Drury Inn in Chesterfield.  It was a lively affair that had many high moments of humor and intensity.  Both candidates have an immense grasp of the issues and are stalwart conservatives.  The ballroom at the Drury Inn was standing room only and filled with the usual conservatives, politicos and bloggers.  I’m blogging this from the debate, so read on for the juicy bits.

Wagner: Secure the border, enforce our laws, no amnesty, hold employers accountable. “How do we get them to leave? One at a time.”

Martin: supports right to work and Rand Paul’s national right to work bill. “Get Nixon out from under his desk! Ask him where the Chinese sweet n low packets are!!  Abolish public sector unions!!  Voting is not enough!  Leaders lead. Public Sector unions must be abolished.”

Martin: “We are the only country in the world that has poor people that are obese!”. Everything is on the block, food stamps, Medicaid, all of it.  We must be willing to cut it all.

Wagner: “Entitlement reform system is not just broken, it’s bankrupt. We have to keep our promised to seniors. I support the Ryan plan. We must make reforms now.

Is Social Security a ponzi scheme?

Wagner: I don’t care what you call it. It’s bankrupt.

Martin: “It’s worse than a ponzi scheme! I don’t want to take on Rick Perry – He hasn’t endorsed you yet has he Ann?” Loud laughter, and applause….

What would you do to stop legislation by regulation?

Wagner: ” There are 4200 regulations in the pipeline to be implemented. This must be stopped! We must do away with the over regulation that is killing job creators.

Wagner: Repeal Obamacare, supports CutCapBalance. “I thought we sent a supercommitttee to Washington called the Congress!”

Martin: John 5:5. Life I won’t compromise on it. Our side compromises on that too much. I’ll compromise on: national security and Israel – with those democrats that are willing.

Your thoughts on the Second Amendment

Martin: It’s a stabilizing influence. We are the only nation where you can own a gun if you are not in the military. It’s a personal , individual right.

Wagner: It’s an individual right and I’ll protect it. One of the greatest things we have here in Missouri is our concealed carry. We own 16 guns, so we are very pro second amendment!

Martin: Let’s make Obama a one term president. This election is not only about what is going on in Washington. It’s about the future of this region. Our future depends on us doing more than just voting.

Wagner: I want to fight for our families, traditional family values, and our job creators. This fight is about our children’s future. We spend too much yet every year we spend even more. We borrow too much, yet every year we borrow even more! I want to be your strong effective voice in Congress. 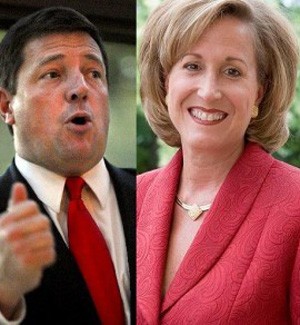 Both candidates had excellent points.  It was great to see them both in action, in fact – I can’t wait to see them again.

UPDATE!  Found some video on Ed Martin’s youtube of the opening statements.  Enjoy!